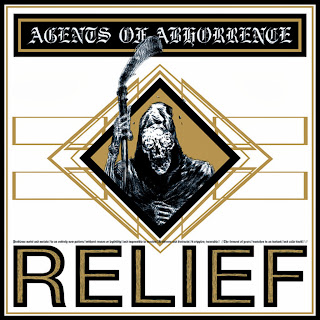 For some time now, Australia’s Agents of Abhorrence has been a part of that post-Discordance Axis pack of grindcore bands extrapolating the game-changing New Jersey band’s melodic innovations into strange new forms. Now, for the first time, with new album Relief, Agents of Abhorrence expands past that and other influences into its own skin, and to say the results are the best thing the band has ever released only scratches the surface.

The somewhat tinny, hyperactive band of former releases has reshaped its component parts into a full, mature force. Blastbeats abound, as always, but rough, earthy warmth pervades this new material. Relief has a warmer, more naturalistic, fuzz-toned sound in contrast with the brittle, icy quality of 2007’s Earth.Water.Sun. Space is a commodity in limited supply here, but the buzzing tone that fills it between notes sounds surprisingly great.

Since its last release, 2010’s split with Roskopp, vocalist Grant Johns left the band, to be replaced by Roskopp bassist/vocalist Jacob Winkler. Winkler’s voice is a gruff, ground-level affair, but he still manages the occasional texture change and acrobatic maneuver. At first, the absence of Johns’ higher-register screaming takes some adjustment, but the vicious mids and lows delivered by Winkler suit the new material so well that Johns is barely missed.

Ben Andrews’ riffs swarm and divebomb, occasionally embracing the odd groove. On the second portion of Relief’s title track, he even give in to some pulsing, deliciously Rob Marton-esque repetition. “Bad News” and “The Mistake Again Made, the Proof Again Put,” both from the album’s back half, also find Andrews mining Marton’s circular Discordance Axis playing style, the latter containing some of Andrews’ best writing of the album.

Max Kohane turns in a tight, crisp, exhilarating drum performance. As with many of grindcore’s drumming greats, his playing is adept enough that he could just as easily find work with a jazz ensemble as he could a hardcore outfit. While I’ll admit that his is a name that hasn’t come up in my past conversations about grind drumming, the blastbeat Max Roach act he pulls here means that is likely to change.


Relief is a dirty, fiery blast of a record that catapults Agents of Abhorrence from another great Australian grindcore band to one of the country’s best. The album’s success puts AoA second only to The Kill in terms of furious, tight, grindcore for grindcore’s sake blasting, and those bands, along with thedowngoing and a growing handful of others, continue to prove that Australia is a major player in the ongoing global arms race for louder and faster that is grindcore. 2013’s album-of-the-year candidates are numerous (see Cloud Rat, Sick/Tired and Cara Neir’s albums from this year for starters, as well as the looming possibility of Gridlink dropping Longhena before the year is out) but if this album doesn’t at least make your list, you haven’t been paying attention.


Relief was released by 625 Thrashcore and Psychocontrol, and you can still find vinyl copies from A389, Ebullition, Interpunk, and others.
Posted by DesiccatedVeins at 6:28 PM