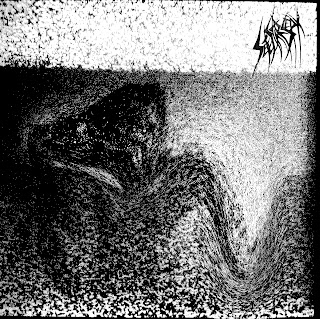 "I remembered a friend who'd died of a bad liver, and what he'd always said. Yeah, he'd said, maybe it's just my idea, but really it always hurts, the times it don't hurt is when we just forget, we just forget it hurts, you know, it's not because my belly's all rotten, everybody always hurts. So when it really starts stabbing me, somehow I feel sort of peaceful, like I'm myself again. It's hard to take, sure, but I feel sort of peaceful. Because it's always hurt ever since I was born." - Ryū Murakami, Almost Transparent Blue (1976)

If you thought explaining the appeal of grindcore to the uninitiated was a headache, try it with noisegrind some time: "Well, everyone tries to play as fast and as loudly as possible, like last time, only now everything's as shrill and as blown-out as possible and the recording quality is terrible. It's great!"

In struggling time and again to sheepishly explain why I love this garbage, I've stumbled into a rough sort of theory that comes close to defining exactly what it is that's so exciting about noisegrind, grindcore and extreme music in general.

Life seems to vibrate at a certain speed, and music in general is pleasant because it matches that vibration. Melodic music is pleasurable because it mimics elements of that vibration in simple, emotionally-resonant figures and recycles them in equally pleasurable variations. However, the beauty of extreme music is that it eschews the derivative qualities of melodic music and seeks to purely mimic the speed and intensity at which our lives operate. The inspiration for grindcore is all around us, just waiting to be tapped into.

That purity of focus is exactly what drives this record, a collection of Japanese bass-and-drums noisegrind band Sete Star Sept's vinyl output from the last two years.


A few months ago, I reviewed Sete Star Sept’s Revision of Noise LP (which, interestingly enough, continues to be one of the most popular sources of traffic to the blog). While the tracks on that record were certainly noisy, those songs were downright mannered compared to the violent, freeform output collected here. The tracks on this collection are of a splintered, grinding avant-noise character that makes it a for-noisegrind-heads-only affair, excepting grinders who enjoyed Revision of Noise and are willing to branch farther afield into a truly alienating space.

The sonic disconnect that traditionally occurs between material from multiple releases is softened by the fact that, while differences in approach and recording technique are evident upon repeat listens, everything is so mercilessly blown-out that nothing sounds incongruous or polished to the point of conspicuousness.

Still, the noisiest section of the collection is easily (and appropriately enough) the split with Noise. Sequenced from tracks 26 to 38, these songs are little more than bubbling geysers of drums, overlaid with a constantly vibrating and barely intelligible low-end and shot through with an occasional vein of vocals. While certainly not unlistenable as noisegrind music, it lacks the punch of much of the other music collected here, and is immediately upstaged by the release sequenced after it.

The split with Penis Geyser, which occupies tracks 39 to 46, contains some of the best material on the album. From the opening blast of "Big Issue," the sheer focus of these tracks is evident: no "exploding song structures," no improvisational hiccups, only sweet, aggressive grinding. While still wonderfully abrasive and dirty, it's mixed well enough that no elements bleed over onto any other, and the structures are tight to the point that the only feedback present is at the end of songs. Of all the releases collected here, this is the one that I most wish that I had picked up on vinyl, and a great starting point for those daunted by the massive volume of music on this collection.

Sete Star Sept are at their most unrestrained on the 50-song Gero Me EP, sequenced here from tracks 64 to 93. A number of these are specks of single-digit blipcore, and many of them have been bundled into omnibus tracks with anywhere from two to eight micro-eruptions contained in a single shot. Songs from Gero Me burst and re-form, splinter and fade, tumbling with the drums into buzzing masses that roll into one another. These songs especially carry with them a sense of free jazz experimentation, and make a case for noisegrind as an extreme music cousin of the improvisational free psychedelia of bands like Sunburned Hand of the Man and Jackie-O Motherfucker.

In many ways, this record sounds like a marriage of two of noisegrind's original classics, Sore Throat's Disgrace to the Corpse of Sid and Fear of God's Pneumatic Slaughter, delivered with a twisted avant character that counts coughs and feedback as elements as integral to the music as drums, bass and vocals.

As a 100-song, 76-minute noisegrind collection, Vinyl Collection 2010-2012 inevitably has its daunting moments, but those who delight in extreme music's experimental tendencies will find a lot to love here. Anyone with more noisegrind than one Gore Beyond Necropsy record in their music collections is going to need this.


Vinyl Collection 2010-2012 (FY40) can be ordered from Fuck Yoga. Sample tracks from the collection can be found on Soundcloud here, here and here, and some of the releases collected here, as well as other Sete Star Sept material, can be found on their Bandcamp.
Posted by DesiccatedVeins at 11:57 PM 7 comments: 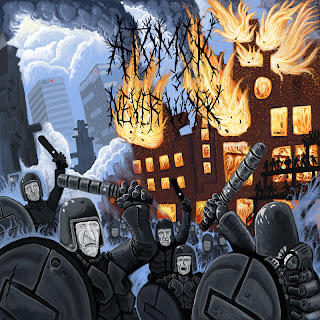 When it comes to music, never write anything off. I hated hip-hop in middleschool, and just a few years ago, couldn't quite “get” Gridlink's Amber Grey upon its release. Whether it's a musical style, album or band, it sometimes takes the right moment before something you didn't get or downright hated finally clicks.

With this new LP from Welsh grinders Atomçk, whose earlier material left me wanting more, that something finally clicked like none of their material had before, and in a way that I would have overlooked entirely had I not given them a third chance after my lukewarm receptions of the split with Paucities and Yes to Alien Victory.

Vocalist Linus' delivery shifts between a deafeningly shrill cricket-chirp high vocal, a cornered-panther mid-high (high enough to be considered some vocalists' high-range scream) , a snotty, tortured midrange vocal and a raw-throated, vomit-flecked low, with gradations in between as deemed necessary. This rather dizzying array of styles is one of Atomçk's chief draws, though at times the shrillness of Linus’ highest vocals flirts with the annoying.

Luke Oram's guitar work on the album is a technical splatter of traditional grind riffs and out-there skronk that will put a smile on the face of modern grindcore fans not afraid to jump down the rabbit hole with bands like Maruta and Psudoku. While still heavy as ever, his tone has lost the too-chunky metalcore sound of their older material, which lends some badly-needed nuance to his bludgeoning guitar performances.

Aptly-named LP opener “Desert Blast” leads in with spacey, stoned desert-rock riffage that wouldn't feel out of place on a doom record.  Progressing in intensity as it adds elements, the track builds into full-fledged desert doom, complete with death growls, before morphing even further into a blast-capable force of grind. With a last harkening-back to its principal musical theme, the song shifts into a thirty-odd seconds blaster that abandons the subtlety of the first section for a vital, Insect Warfare-esque grind assault. This is one of Atomçk's most impressive tracks to date, and it showcases a surprising strength for the band in its grasp of both the atmospheric and destructive elements of its sound.

“If This Peace is Fictitious… I Will Destroy It” follows a rather unconventional structure to its close at the 34-second mark. From a heavy, grinding opening five seconds, it rides over a speedbump of four micro-pause sections, the first three of which are broken by a short, death-growl-accented blast 'n' grind. The fourth pause is broken instead by a drum fill, followed by one of Linus' cricket-high screams and a riff that starts out as conventional and dissolves into an alien heat ray of Asterisk-style wonked-out fretwork.

Positioned near the middle of the album is “No Sleep Til Trutnov,” a mutating, nearly-4-minute track that serves as a sort of center point for Never Work. Beginning its life as a bile-spitting grinder, it downshifts into sludgy repetition after about 30 seconds. As it rides this newfound groove with a krautrock-esque determination, elements of noise creep in until, by around the last minute, the only remaining signifier of the song’s past is the breadcrumb trail of drummer Marzena's percussion, which keeps us from getting lost in the dark forest of the song’s structure. The fact that this track works as well as it does is testament to what seems to be an improvement in the band’s curatorial skills. “No Sleep Til Trutnov” is the kind of song that most bands would sequence at the end of an album, but as track 8 it offers a respite from the intensity of the preceding tracks without derailing their momentum. [See that, every other band ever? Slower-paced songs don't have to be bookends. I promise.]

The aforementioned noise on the album is created by Oram and Chicago experimental act Winters in Osaka, and is presented in a more smooth and organic way than on past material. Noise fans will still get their harsh, abstract kicks, but in a way that's not going to freak out more vanilla grindcore fans.

This LP is a splintering, left-field art-grind collection for those who like a little adventure in their grindcore, as well as those who like a lot of grindcore in their art. On this outing, they continue to differentiate themselves from the grind masses while sanding down some of the more awkward edges in their sound.

Atomçk manage to make Never Work both their most varied and cohesive offering to date, and it's the perfect place to start paying attention to their brand of shrapnel-laced grindcore.

Never Work is available as a pay-what-you-want download from Atomçk's bandcamp.
Posted by DesiccatedVeins at 9:15 PM 7 comments: