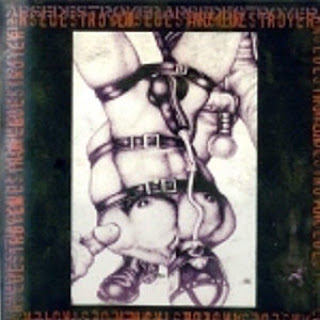 The sheer power of words baffles me. The act of simply supplying a name or a description to a thing has the ability to provide form and purpose to a previously nebulous space, a sort of linguistic birth-giving that wholly alters the thing's existence as long as knowledge of that name or description exists. Perhaps due to this phenomenon, language-using humans tend to fear or simply ignore the nameless or the indescribable. That which is impossible to catalog then, in a sense, ceases to be.

Teenass Revolt, the noise-friendly LP from the Swedish grind madmen in Arsedestroyer, seems to suffer a similar fate when brought under scrutiny by many discerning grindcore fans. Spanning 38 untitled tracks, this utterly unhinged offering rarely receives any sort of attention, save the few diehard proponents that assure that its ugly aural legacy will live on (Beau from Insect Warfare constantly name-dropping it in interviews and on the band's blog is the primary reason I decided to give this album a chance in the first place.) The fact that the tracks offer little or no reference point, unless “that one with the weird Swedish dialog sample” counts, and few aesthetic or ideological cues save the package art, the band name and the album's title, means that the assimilation process for the record is rather unconventional, and may serve to drive off all but the most persistent listeners.

Musically, this is not entirely unfamiliar grindcore territory. One basic reference point could be Sore Throat's Disgrace to the Corpse of Sid, though this is nowhere near the unabashed mimicry of that record that's evidenced on something like Agoraphobic Nosebleed's Altered States of America; song and album structure is entirely the band's own, and there are no blipcore throwaways in attendance here. Arsedestroyer suture a more urgent and destructive tendency to that template, with the assault of Jon Chang's projects at their most lethal and the blown-out production of Rise Above's essential I Love to Relax LP.

Like many of my favorite extreme music offerings, Teenass conjures up its own unique atmosphere of foreboding during private listening. It sounds like the musical equivalent of a grainy foreign snuff/torture VHS, and the strange Swedish vocal samples (the sample which opens the album sounds like it could come from an intensely creepy Swedish rendition of a Three Stooges routine, and later in the album, the band even manages to make a sample of people mewling like cats sound deeply disturbing) add to the linguistic disorientation (provided that you're not fluent in Swedish, I suppose.) What could, in another context, come off as tired gore tropes, are rendered here in skewed and almost impossible to replicate fashion, making this record a solitary experience among years of grindcore achievements.

This album is a shining example of the argument for grindcore-as-aggregate; while individual tracks can more than hold their own, the album as a whole renders that unnecessary. Even lack of songtitles, taken in the long view, seems less of a stumbling-block than a means to highlight the sheer nihilistic beauty represented in Teenass Revolt.

Posted by DesiccatedVeins at 4:41 PM 5 comments: