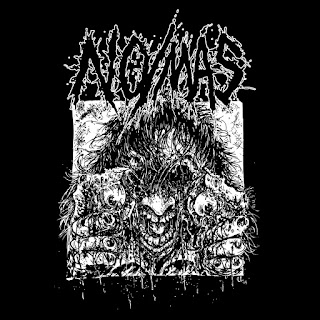 Washington, D.C.’s No/Más make blasting grindcore blended with a strong strain of d-beat and crust punk. Those influences manifest themselves in a few key ways. In the case of a song like “Rabia,” it’s that the first 36 seconds ride a d-beat, until a moment’s silence is cut by a freight train blastbeat. Or in a song like opener “Claustrophobia”, it’s a mid-tempo breakdown near the halfway mark that channels grinding kinetic energy into raw punk fury.

These are common influences in grindcore, to the point that it would feel unnecessary to mention them save for the fact that each element of the band’s style is so distinctly articulated and well-integrated. While the way the band deploys its more overtly punk influences is a big part of this record’s sound, don’t expect a punk record with some grinding parts. This release is all forward momentum, and every breakdown is just seconds away from the next full-bore grind section.

This EP signals a sonic leap forward for No/Más. The songwriting on the Last Laugh EP is tighter and more confident than on 2018’s ten-track Raíz del Mal. The production differences in the two releases are notable as well. Last Laugh is a thicker, fuller sounding record without sacrificing immediacy or bite. The guitars sound heftier, the growls deeper, the drums crisper.

No/Más have been growing rapidly as a band since 2017, and they show no signs of slowing down. This release has rightfully attracted more attention to the band, as has a recent support date with Pig Destroyer in Baltimore. These songs feel engineered to be impactful in a live setting, and playing shows with this material is sure to continue to grow their fanbase.

Last Laugh is a notable release in the world of grindcore, and seems likely to appear on a number of year-end roundups of the best releases of 2019 despite stiff competition from releases by Cloud Rat and Discordance Axis offshoot No One Knows What the Dead Think. If their next major release can capitalize on the improvements made on this one, expect to hear a lot more from No/Más.

Posted by DesiccatedVeins at 10:37 PM No comments: 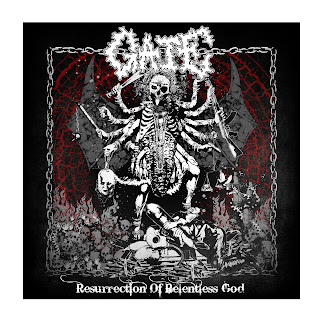 Gate had been around for 5 years at the point of Our Last Day’s release, and had a demo and a pair of EPs under their belt. After the collection’s release, they had developed some buzz in grindcore circles, and released a 3-way split LP on Blastasfuk Records a year later, called Crushing the Grindcore Trademark. They released a number of splits and a 7” called 希望＝絶望, but never managed to release a full-length album.

That’s where this album comes in. Put out 5 years after the last Gate release, a collection called Early Works, Resurrection of Relentless God is the first full-length album in the band’s discography. With an historically erratic release schedule and varying audio and performance quality across their catalog, it’s hard not to ask: after almost twenty years, what can we expect a Gate full-length to even sound like?

Turns out, pretty damn good. This is the Gate that fans of that first decade of material will remember: almost constant, lightning fast drums, growled vocals, dry, buzzsaw-tone guitar. However, this incarnation of Gate is like a well-made videogame remaster: faithful to the source material, but adapted to modern sensibilities. Gate sounds better than ever here, while still retaining a significant layer of grit and rawness.

Resurrection of Relentless God consists of 21 barreling tracks that average out to a minute and 20 seconds per song. What that adds up to is a briskly paced record, with songs that still have some room to breathe. Save for the album being bookended with samples from what seems to be the 2010 remake of I Spit on Your Grave, there’s almost constant forward momentum.

Despite being a step up in audio quality and production value from other releases in the Gate catalog, this is a timeless-sounding example of classic Japanese grindcore. These songs could sit effortlessly next to favorites from Rise Above’s I Love to Relax or Mortalized’s Absolute Mortality #2 on a playlist. Jagged, twisting riffs, pummeling drums and relentless vocals are everywhere here, with songs like “女神ノ天秤” and “Emancipation of Yourself” exemplifying the style.

This is an album that felt like it would never happen. What makes the fact that it did even more bewildering is that this is the best material Gate has ever released. Only time will tell whether Gate will release another album after this, but this one is more than enough to cement their place in the esteem of grindcore fans for years to follow.

Resurrection of Relentless God is available digitally on Gate's Bandcamp, or on CD from Obliteration records with a bonus cover of 324's "Lowestlevel" from Obliteration's Japanese-language store or via Hells Headbangers. [Digital download edition was used for the purposes of this review.]

Posted by DesiccatedVeins at 9:58 PM 2 comments: 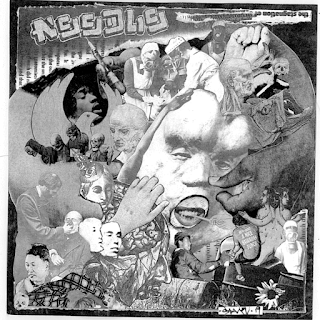 Needle is grindviolence three-piece from Washington, D.C. This self-titled second EP is a brief, expertly-realized slice of exactly what it sounds like.

Opener “Shattering Retinal Matter” wastes no time laying out exactly what you’re in for on the rest of the EP. Seventeen seconds of fretwork, blasts, mid-range screams and low growls, plus a King of the Hill sample, it offers the ideal tone-setting intro. “Sonic Terrorism” rides a loping intro straight into a wall of blastbeats and grunting lows for an adrenalizing minute of grinding punk. “Extinction Blast” is the one you’d put on a label compilation, if that was a thing you were doing, because it’s a ferocious, sub-one-minute, middle tempo blaster that sums up the band well and would slot in nicely alongside a range of styles.

While Needle certainly has its share of blastbeats, it doesn’t prioritize speed over all else. “Reaper Descends” and “Flagrant Display of False Hope” showcase meaty thrash riffs and pit-opening tempo changes, and “Inter-Dimensional Game of Suffering” features a hip-hop outro of the style you might find on a Spazz record. Rather than speed, Needles focuses on a sense of sheer propulsion, making it an ideal soundtrack for a skate session or a bike ride to work.

This is well-made, high energy grindcore with a healthy dose of riffy punk, and if there’s any shortcoming I can find, it’s that this description sums up most of what I have to say about this release. It gets in, blasts hard and gets out, and while it truthfully has more tricks up its sleeve than some records that I’ve reviewed on this site in the past, it isn’t trying to reinvent its chosen genres. However, if “grindviolence EP from To Live a Lie” is a phrase that gets you excited, this EP comes highly recommended.


Needle is available on cassette from To Live a Lie here or digitally from Needle's Bandcamp page.
Posted by DesiccatedVeins at 6:15 PM No comments: