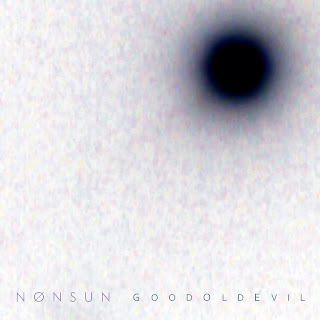 Lviv, Ukraine’s Nønsun plays a style of doom metal mixed liberally with drone, sludge and modern post-metal. As the years have progressed, the meanings of these aforementioned genres have come to denote an assortment of things, and, seemingly in answer to that fact, this band, on points throughout its 48-minute Good Old Evil “demo,” manages to cover most of them.

“Jesus’ Age,” after a beginning blast of noise and feedback, lumbers into a doom metal plod that’s anchored by vocalist Goatooth’s full-throated roar. Droning noise rushes back over the song, like the ocean reclaiming the coast, but after roughly a minute guitars, drums and vocals re-enter the song with a devastating, YOB-style heaviness, complete with bluesy stoner metal soloing that is undeniably indebted to that band's sound. The push-pull between drone and metal continues, with long stretches of both commingling beside one another. Out of the final stretch of metal, the drums and guitars begin to pick up speed for a bashing, almost punk section that collapses into molasses-drenched doom and feedback.

In addition to the expected heaviness and passages of enveloping noise and feedback, some surprising bits of melody find their way onto the album. Moments like the second half of "Rain Have Mercy," with its elegiac-sounding riffs and soloing and spoke-sung vocals, reveal  how far-reaching Nønsun’s sound is within its chosen genres. Though less representative than “Jesus’ Age” of what Nønsun does most, “Rain Have Mercy” might be the best track to introduce the average listener to exactly what the band can do. Though I love how huge and angry the former is, there's a transfixing emotional nuance to the latter that draws me to it individually, even if I don't have the time for a listen to all 48 minutes of the demo.

Nønsun’s strengths, as mentioned above, are in the way it fits together the extreme influences that encompass its style. It follows, then, that Good Old Evil’s weakest point is the nearly 7-minute rolling drone that is “Message of Nihil Carried by the Waves of the Big Bang,” which contains little-to-no genre mixing and only the barest changes in tone or mood. As with other drone and noise compositions on extreme punk and metal records, the emotional flatness of “Message” belies the peaks to which these genres can be carried by veteran practitioners.


After the droning of “Message,” closing track “Forgotten is What Never Was” makes a slow transition back into doom metal, beginning with noise and piano and working up to an ancestral stomp, out of which only occasionally bubbles growls or chanted vocals. Little more than a mesmerizing exercise, the 11 minutes of “Forgotten is What Never Was” feel longer than the 18 of “Jesus’ Age,’ and while its slow, atmospheric progression makes it a stronger piece of music than the drone work that precedes it, it joins that work in being part of the weaker second half of what is otherwise an excellent first release.

Overall, this is a band with a ton of promise. The impressive amalgam of extreme genres (on both the metal and noise sides of that spectrum) represented on the first half of the release, if reigned in with a slightly tighter compositional leash and carried over the final two tracks, would have made the word "demo" completely unnecessary here and elevated the band from "awesome, can't wait to hear how they improve next time" to a plain old "that's awesome."

Stream Good Old Evil below and/or download it for free from Nønsun's Bandcamp. [Note: The band sent me a download of the album.]

Posted by DesiccatedVeins at 3:37 PM No comments: 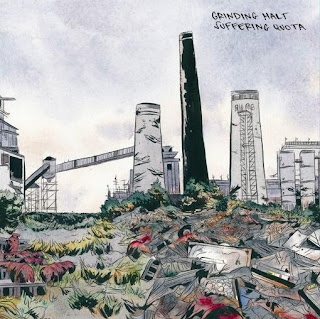 Grindcore's Internet-era globalization, while maligned for disintegrating the thrill and discovery of organic networking and tape-trading within the punk scene, brings the unquestionable advantage of leveling the playing field for bands outside of stereotypically accepted scene loci like North America and the UK. A non-US or UK band no longer has to be attached to a prominent label (or any at all) to gain international exposure, which, scene politics aside, is nothing but a great thing.

All this to say, then, that had the Internet never existed, I would never have heard this pair of Netherlands bands (or seen their satisfyingly colorful 7" cover art). Grinding Halt and Suffering Quota feel like children of that globalization, both in the musical styles they integrate into their sounds and because of the still-amazing fact that I'm listening to their music hundreds of miles away from where it was made, not thanks to label plugs or tape trading or letter-writing, but simply because of the magical musical equalizer that is Bandcamp and services like it.


Grinding Halt’s side opens with the lacerating “Kaaskopen,” a shrill-vocaled, heavy-riffing piece of grinding fastcore that morphs into a rich, Southern sludge metal after a mid-song bass break. Initially unassuming, repeated plays reveal the sophistication it takes to blend the whole thing together so effortlessly. While these sorts of structure aren’t new, the track feels organic, and each section would work as well on its own as well as it does as a part of a greater whole.

The standout track from either side, it is also a blueprint track for the duality in Grinding Halt’s approach. Their other two contributions (“Knuffelverzet” and “Bedrog”) are predominately in a groovy, Southern sludge style à la Thou, with a hardcore punk accent to the vocals and instrumental performances.  The punk hybridization is also present in the tracks’ lengths, as only one exceeds 2 minutes (and then just barely), and their shrewd songwriting gives the tracks a sense of being well-honed song nuggets rather than stunted throwaways.

“Bedrog” is pulled straight from the closing song handbook, as it is heavy, driving and feels like a recapitulation of the side’s previous sounds. With groovy Southern progressions and impassioned, frantic shouting, it shows a glint of that mournful, end-of-the-world quality found in many of the best album-ending songs.

Grinding Halt’s approach is upon first listen unusual, as the switch from grindcore to sludge metal (but never, on this release, back to grindcore again) seems to defy conventional wisdom. However, after some time spent with the songs, the progression feels natural, and a well-curated continuation in a similar direction could yield exciting results.

A batch of thick, mosh-ready grindcore songs from Suffering Quota occupies the B side. “No Lust For Life” is a beatdown masquerading as a thrashing hardcore song, and the singer sounds like he’s screaming the title in your face, with veins popping out on his neck and spittle flying from his mouth. Once the song reaches its stride near the 50 second mark, the whole affair picks up considerably, abandoning the mosh for the blast until a repeat of the opening “chorus” finally melts into a closing vocal sample.

“Goodbye Self Awareness” is both the shortest and the tightest track among their offerings here. It recalls, while considerably less outré, Total Fucking Destruction’s most straightforward and punishing moments, or a genetic experiment between Noisear and PLF. Its barreling pace and frantic vocals mark it as a standout among Suffering Quota's tracks and a worthwhile starting point for those put off by the sometimes mid-paced, meaty sound of the band's other songs.

These are songs that sound manufactured for the pit veteran, not the BPM fiend, and those looking for innovation or alienating speed would do better searching elsewhere. However, those seeking well-produced, tough-sounding grindcore for those “I want to break stuff” days that we all have will find a lot to like about Suffering Quota's andrenalized death-thrash grind.

The transition from one side to the other is neither perfect nor overly jarring, and this certainly isn't the most unlikely pair of bands to share a split. The contrast between the two bands' production styles (Suffering Quota's sound is fuller and better-produced) makes the switch from one to the other noticeable, but in a few seconds the change is a non-issue.

Overall, this 7" is a fair introduction to two Dutch bands previously unknown to me. Neither band's output here has made me rush out and fill myself in on their back catalogs (I am, however, eyeing this pretty hard), but it has most definitely put the pair of them on my radar.

Stream or download Grinding Halt and Suffering Quota's Split 7" below or purchase the 7" from Give Praise in the US or Parade of Spectres in the UK.

Posted by DesiccatedVeins at 9:52 AM No comments: