I've said it once, and I'll say it twice: grindcore is tough to pin down. As formulaic as the genre may seem to the untrained eye, no formula can explain anomalies like the inclusion of burly industrial experiments or poetry intros on Agathocles' Razor Sharp Daggers, the bouncy pop-punk/grind hybrid “Ten People” from Damage Digital's Moss, or the closing track to Slight Slappers' A Selfish World Called Freedom, “Vanette,” which segues from swirling noise into a sweet, keyboard-driven ballad dripping with 50s-style charm. And don't get me started on Brutal Truth, Exit-13, or Total Fucking Destruction. Grindcore's a genre that bands aren't afraid to let their other influences roam free in, too, and so it's only natural that hip-hop appeared in the mix by-and-by. The ways that these five selections employ hip-hop and grindcore are diverse as the genres themselves, and serve as a “For Dummies” guide of the way the two styles can be artfully melded together on a record.

5. S.O.B.- “Tukikage”
After their '80s glory days, S.O.B. lost more than a little of their thunder. The 1999 album that this track comes from, Dub Grind, features disappointingly little of either dub reggae or grindcore, although it does manage to pull off a nice experimental trick or two. This minimalist, dub-tinged hip-hop track is one of the brighter spots on the record, and hints at what this album could've been if the band took half of the risks they should have taken in making Dub Grind.

4. Catheter- “False Sense of Judgement”
Sporting the smallest amount of hip-hop of any song on this list, this track serves as an example of the hip-hop appearance as accent, rather than as introduction or “Oh man, can't believe they did that!” hook. The brief, sparse beat that serves as this song's outro is one of those passing things that really doesn't ever get an explanation, serving to illustrate the sort of comfort with the genre grindcore bands have found in the 2000s.

3. Genocide- “Intifada”
Coming from the Mexican group's We Rape the Sky, We Rape the Hell LP (find it here at Cephalochromoscope if you don't have it on your harddrive,) this track is one of the most surprisingly well-produced on this list, and easily the best-sounding thing on Genocide's entire record. The other surprising thing about this track's brooding, Middle-Eastern beat is that it's so good, I'm almost disappointed when the grindcore section inevitably kicks in.

2. Magrudergrind- “Heavier Bombing”
Magrudergrind have always seemed to me a sort of more agile, neo-Spazz, and this reworking of This Comp Kills Fascists track “Heavy Bombing” (possibly the world's first grindcore remix, barring things like disc 2 of Agoraphobic Nosebleed's Altered States of America) does nothing if not prove that fact. Surly, metal-inflected beats build for most of the track, while an MC chants “It's getting' down to the grind/Magrudergrind” before the band explodes onto the track for roughly 30 seconds. Their supremacy doesn't last long, however, as the track gives way to hip-hop again, this time in the form of a dark, 90's style G-funk outro (think Snoop Dogg's “Murder was the Case” or “Serial Killa”) that encompasses the last 20 seconds of the song.

1. Spazz- “Camp Chestnut”
This is the track that started it all. When you think of combining grindcore and hip-hop, this should be the song that immediately comes to mind, sort of the “Bring the Noise” of hip-hop/grindcore pairings. A weird, trashy vocal-loop beat serves as the springboard for what might be one of the strangest collaborations in metal history. Several seconds in, Kool Keith appears on the track and starts shouting out Spazz. And then your mind explodes. Immediately after the explosion of your head, Spazz appears to grind what's left of it into powerviolence-scorched little bits. The full story of how the collaboration came about, as well as the “Autopsy, Def Leppard and Spazz” line from Dr. Octagon's “I'm Destructive” can be found here in this fascinating blog post by former Spazz guitarist Dan Boleri, which illustrates further the strange sort of overlap the two seemingly disparate genres have with each other. No one can quite explain why it works as well as it does, but melding hip-hop beats and grindcore fury seems to be a secret art that certain adventurous grinders are probably going to keep tucked away in their arsenal for the rest of the genre's history.

Posted by DesiccatedVeins at 5:27 PM 5 comments: 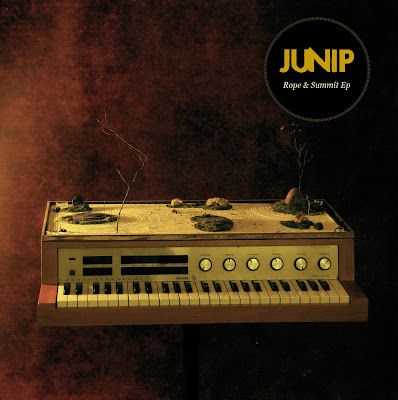 When first hearing Junip's “Rope and Summit,” title track, presumable lead single, and opener of their newest EP, I'm not ashamed to admit that I thought, and possibly spoke aloud, the words, “HOLY SHIT I CAN'T WAIT TO HEAR THEIR ALBUM.” Yeah, I liked it that much.

This, before hearing that Junip is the project of José González, an artist I've always been sort-of indifferent to, almost to the point of dismissiveness.

This, while not knowing that the release the track is featured on is a mere four-song EP, not the full-album offering I'd been hoping for.

As a reviewer, forgive me if I focus on one track exclusively over others, but Junip's “Rope and Summit” is a track that's both refreshingly familiar and surprisingly inspired. Its tentative, folk-tinged openings and instrumentation build into a sparse, yet krautrock-energized, track that invites repeat listens by combining the former genre's plaintive guitars and the latter genre's insistent keyboards and drum patterns into an alluring combination of drive and mystery seldom heard in modern music. I can tell you it reminds me vaguely of Fleet Foxes and Yo La Tengo, although, truly, it probably won't sound like either of them when you listen to it. This is either the mark of an incredibly poor reviewer or an adept artist. I for one beg for your choice to err on the side of the latter, although the final decision is up to you.

The track that follows, “Far Away,” attempts to capitalize on the opener's momentum by beginning with an almost prog-rock jam as introduction, and while the motorik beat and suberb vocal contribution by González come close to living up to their tracklist predecessor, “Step in front of a runaway train/ Just to feel alive again” doesn't hold a candle to the stuck-in-my-head-ability of “Rope and summit, rope and summit” repeated over and over again, even though I STILL don't quite know what that track could be about, other than mountain climbing.

As for the third track of four, the eight-minutes-and-change “At the Doors,” if Yo La Tengo learned this song and decided to include it on their next record, one would be forgiven for insisting to friends that González and Co. had covered YLT and not the other way around, chronology be damned. For all its hypnotic, krautrock drive, the song fails to rise above its influences, and could've been written by any kraut-inspired indie group from the last two decades.

Closing track “Loops,” all softness and repetition, sounds like it could be exactly what the title implies, a palatable series of guitar and drum loops which vocals were applied over, despite its opening plea to “disconnect all loops.”

Ultimately, this EP is a prime candidate for the argument of single vs. longform. While offering an excellent single on the part of the title track, the rest of the album, for the most part, renders itself as only quietly enjoyable to the point that it might be soundtrack music. Rather than bringing into question José González and the two other obviously competent musicians who comprise the band, one wonders whether the current pressures of the music industry itself might have stunted this clearly promising offering, causing it to be released as a free download rather than a full-price album.

Posted by DesiccatedVeins at 4:59 PM No comments: