Music, for me, can be as much about the people behind the songs as the songs themselves. Because of this, I've always loved interviews that share more than album details and what trashy horror film a band picked their name from. Grindcore's street-level, everyperson sensibilities make it perfectly tailored to this interest of mine, and I, like many others love when a band mentions being influenced by something I love, or simply liking to do the same things that I do.

For these reasons, I've decided to put together a feature where members of grindcore bands (and some others along the way) share their favorite recipes, to celebrate a universal, community aspect of everyone's lives that seems to get lost among hand-screened album covers and basement-painted t-shirts in the punk ethos: cooking. I'm starting the feature off with my own favorite recipe for cheesy bacon potato cakes (yeah, they've got to be terrible for you, but they make up for that by being fantastic), and you can expect some awesome recipes from actually talented people very soon.

Wash and shred potatoes into hashbrown-sized strings. Carefully strain off excess liquid (yeah, you might lose some nutrients, but your potato cakes will stick together that much better). Set potatoes in a bowl and set aside.
Fry bacon in a pan or skillet, cooking until halfway done. Set aside.
Crack eggs, and separate yolks from whites in a cup, immediately depositing yolks into your potato mixture. [Feel free to add a portion of the egg whites for an eggier texture; don't add too much or your patties won't adhere properly.] Freeze your egg whites in a baggy (marked with the number of eggs and the date you froze them) for future use in a mousse or egg white omelet.
Add onion, bacon and cheese to your potato mixture. Add ground pepper, salt, dried chilies or other seasonings to taste. Using your hands, combine ingredients thoroughly.
Add about 3/4" (2 cm) of oil to a clean skillet, or enough to halfway submerge your patties. Turn your burner to around medium and begin heating up your oil.
Begin forming patties around the size of the palm of your hand, and once your oil is hot enough, start frying several of these patties. Cook each side around 2 minutes, or until each side is golden brown and fully cooked.
After each is cooked to your taste, remove to a paper towel-covered plate, and sponge off any excess grease with another paper towel. When finished, plate with spiced sour cream or Sriracha mayonnaise dipping sauce and serve.

Veganize It: This recipe can be easily made vegan by using a vegan cheese of your choice, substituting store bought fake bacon or homemade tempeh bacon for its meat counterpart, and using vegan egg replacer or vegan mayonnaise as a binding agent in the place of eggs. Vegan ranch or Sriracha mayo made with one of the many varieties of eggless, vegan mayonnaise will both work great as a dipping sauce.
Note: Different vegan cheese products melt at different times and temperatures. If you know you have a softer, quicker-melting product, consider initially leaving the cheese out, frying the first side and then removing the patties from the oil and combining the cheese with the uncooked second side before returning your patties to the pan.
Posted by DesiccatedVeins at 11:51 PM 3 comments: 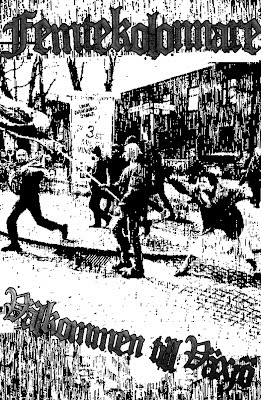 If you have been reading this blog long enough, you’ll have noted a recurring theme in a number of my reviews regarding prejudices and reserving judgment. My rampant liberalism aside, this can be attributed to the fact that my opinions are most often proven spectacularly wrong.

Case in point: my treatment of Swedish grindcore and powerviolence. Despite a general affinity for Sweden itself, I find that too often the grindcore it exports seems to share an overly-manicured, safe quality with its famous death metal. Acts like Rotten Sound, Splitter, Sayyadina, even Nasum sound too polished, too over-engineered to me, lacking the violence and urgency that makes this style so vital. For this reason, I generally write off most Swedish extreme music as embracing this pitfall. And most of the time, I’m right.

In this case, however, it was quite a pleasant surprise to be proven wrong by the dirty, blastbeaten Swedish fastcore of Femtekolonnare and their newest tape, the seven-track Välkommen till Växjö.

Led off by a vocal sample that ends in a “One, two, one-two-three-four” count off, A-side opener “Och bilen går bra” smashes open into a high-pitched grind that gradually commingles with punk riffage until finally blinking out of existence to usher in the next track. The EP’s exact middle, the awesomely titled “Spela Snabbare” (“Play faster”) finds the band indulging its most punk rock tendencies, riding a simple (but gut-level satisfying) chord progression through a series of changes, including a shout/scream call-and-response between vocalists Fritjof and Jonas. Speed-freaked closer “Ett jävla daltande” ends the tape on a frantic note, though the band still leaves room for two second-long drum breaks that offer another example of the vital stylistic diversity that distinguishes this band from its peers.

Lyrically, the band favors a humorous, often satirical anti-establishment style, evidenced by titles that Google Translate tells me mean things like “Everyone Laughs at the Cops” and “Öjaby - Växjö's Asshole.” That humor is a crucial ingredient to what would otherwise be a collection of finger-pointing sociopolitical punk songs, not exactly uncommon to this style of music.

Välkommen till Växjö’s packaging is minimally but tastefully designed, all blacks, white and greys, as befits a DIY hardcore tape of its ilk. Drummer Carl’s choice of typography and abstracted, militant images recalls the old school in a modern way that comes off as referencing rather than aping it.

This release, neither the band’s most aggressive nor its most crust-leaning, offers an effective entry point to the rest of their catalog for that very reason. It’s this balance of styles that makes Femtekolonnare so noteworthy, blistering energy and light-hearted, moshing punk trading off in such equal measure that they serve as a suitable soundtrack to both riotous anger and righteous air-drumming.

Välkommen till Växjö is available through Ingen Våg.

Valguiden (2010)- 8-track cd-r released a month before the Swedish parliamentary election that dedicates a track to slamming each of the Swedish political parties. Notable track(s): “Sossarna”, “Källsorteringspartiet"

[Note: The band sent me copies for review.]
Posted by DesiccatedVeins at 2:15 AM 4 comments: