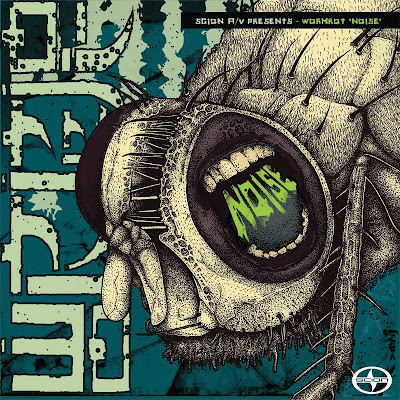 As soon as the words “corporate sponsorship” and “grindcore” appear in the same sentence, it’s natural for the punk in all of us to cry foul and start spouting some nonsense about “the Man,” “subjugation” and “ideals.” And to be honest, most of the time, said punk would be absolutely right.

The fact that I find an exception in the partnership between Wormrot and Scion A/V for this EP (as well as those with bands like Gridlink and Harvey Milk for their live series) has little to do with what I think of Scion or their parent company in any corporate terms, and fuck-all to do with the purchase or sale of automobiles. The sole reason rests with the fact that Wormrot (and other bands that Scion A/V has worked with) make great music, and the Scion folks recognize that and know enough to stay the hell out of the way.

One of the few criticisms that have been leveled at this year’s Dirge, Wormrot’s standout sophomore LP and yet another great year-end contender in a year of excellent records, is that there wasn’t a large amount of measurable growth from the band’s breakout 2009 offering, the much-lauded Abuse. Sure, their extensive touring schedule showed in Dirge’s tightness and polish, and there were riffs and blasts galore, but other than some production differences, you could play the two LPs side-by-side and more likely than not miss the changeover.

This EP bucks that trend by offering 5 songs that, while sonic kin to Dirge and clearly born from the jam-based writing style the band tried out on that record, come packed with a shifting bag of sonic tricks that make these some of the most chameleonic yet patently Wormrot songs that the band has released thus far.

Opening the EP is the feedback-soaked freight train punk of “Loathsome Delusions,” a fairly traditional Wormrot grinder that crams speedy, metallic riffage and one of the galloping, three-quarters time punk sections that the band favors into its structure without feeling cramped or forced. Careful listeners (or those who listen to the EP on repeat) will notice that Noise pulls a Finnegan’s Wake move, making the feedback from fifth track “Perpetual Extinction” Ouroboros onto the opening squall of “Loathsome Delusions” for a neat, cyclical effect that’s just one of the many well thought-out decisions the band makes over its 5 minute, 11 second runtime.

Middle track “Outburst of Annoyance” spews thrash-scented riffage all over you, then drops in a circle pit-forming breakdown so that vocalist Arif can get all Shawn Johnson on your ass. As the rest of the bands skanks away, Arif busts out vocal back handsprings and aerials, shifting from several varieties of shouted vocal to growls and highs, sometimes all with the same breath.

The band pulls out all remaining stops for breathtaking closer “Perpetual Extinction.” After a meaty, lightspeed opening, Rasyid and Fitri trick you into saying “Aw fuck, a breakdown?” before laughing their asses off and playing fast again, a trick they pull off in one form or another for a large portion of the song. Next, the band shit on your expectations once again by managing to navigate dropping a thrashy, Iron Maiden-esque lead solo into 30 seconds of the song’s 1:11 run time without a scintilla of cheesiness, which is something I’ve straight-up never seen before in this sort of balls-out grind.

The highest compliment that I can pay to a free release such as this one is to say that I wish that I could buy it, not only so that I could have a physical copy of another of Arif’s consistently amazing album covers (you can find more examples of his fantastic artwork here, including a drawing of H.R. Giger’s classic Alien creature) but because it just is that good. The continuing upward trajectory that the band is on makes me drool for what a third LP would sound like; if it even nears the level of this release, Noisear’s already-finished fourth full-length is going to have stiff album-of-the-year competition in the year to come.

For anyone who hasn't grabbed this slab of digital goodness yet, you can find it here at the Scion A/V site.
Posted by DesiccatedVeins at 12:35 PM 8 comments: