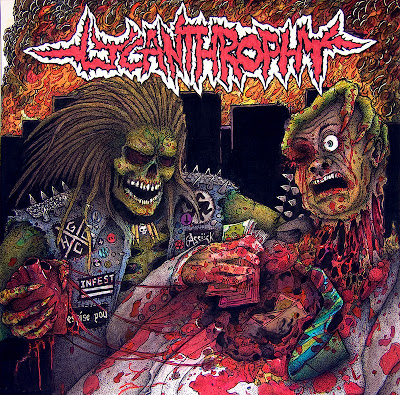 “Ships at a distance have every man’s wish on board. For some they come in with the tide. For others they sail forever on the horizon, never out of sight, never landing until the Watcher turns his eyes away in resignation, his dreams mocked to death by time. That is the life of men.” – Zora Neale Hurston, Their Eyes Were Watching God (1937)

No band’s road to its first LP is quite identical to any other. Some begin by slowly riding the demo circuit, eventually working up to the big LP; others put out their first full-length before releasing a note of other material (in some cases, even before touring). Still others churn out splits and obscure tape releases for years without a hint of longplayer aspirations, leaving fans in perpetual fear of a breakup prior to even a proper debut album.

Czech grinders Lycanthrophy’s trajectory up until now offers perhaps the best working blueprint of this third route (next to pre-2011 Archagathus, that is). Now that they’ve finally crossed the threshold into LP territory, the most pressing question yet looms large: Was it worth the wait?

The material on this LP mostly continues the trajectory the band has plotted over a series of splits with bands like Suffering Mind, F.U.B.A.R., Gride and Kursk, maintaining the ferocious, crusty fastcore sound heard on those releases (while beefed-up considerably for full length presentation). On the twenty tracks that compose this self-titled debut, some of the best tracks from those recent splits coexist (in re-recorded form) with new material for a seamless, accomplished fastcore experience.

The latter is most likely the reason you picked up this release in the first place, and it doesn’t disappoint.

Cymbal hits like the beeping of a timed explosive open the album, and “Tighten Your Belts” detonates into a fast, moshing track that grinds like industrial recycling machinery for its :47 run-time.

“Born With Debts” follows with a strafing machinegun assault, vocals, drums and guitars jumping on the track almost in tandem to blast away any doubts that the band slowed down (or “sold out”) for this full-length. Its snarling punk anger is vintage Lycanthrophy, and it ends up being one of the best cuts on the album.

“Primitive Game” shifts nicely from a thrash-punk stroll to a stop-start grind with guitars that whine like power drills, and pauses a moment to reflect on its thrashy beginnings before tacking on a couple of blastbeats for good measure.

One disappointment for fans familiar with material from their other releases is playing the old split tracks and their re-recorded incarnations on this LP side-by-side. While the new recordings fit better with what is overall a more accomplished, mature playing style on this record, what they sacrifice is a fury, a violence, a lack of polish that the older recordings of songs like “Vomit and Celebrities,” “Fur Farms” and “The Morning After” had that ultimately made them so exciting.

This is the sound of a band that’s found its comfort zone; while that familiarity means, in this case, an album’s worth of across-the-board solid, consistent material, it also means a recording experience apparently devoid of the friction that can sometimes spark a band’s most vital, energetic in-studio moments.

The fuller production found on this LP accounts for some of that apparent spit-shine, but don’t expect some big, structured, major-league metal “production”. The true hallmark of production done right on a punk release such as this one is that you forget it’s there, other than to note that it doesn’t sound like Agathocles recorded it in a vegan taco truck or some Swedish perfectionists laser-honed it in a hermetically sealed lab hundreds of yards underground. Nothing is unbalanced or frightfully compressed, and the drums are mic-ed well enough that they don’t sound like a group of drum circle buskers on a subway platform. Mission accomplished.

Despite the lack of boundary-pushing and the presence of older material, Lycanthrophy turns in a solid, heart-pumping (or -ripping, judging by the artwork) album of fastcore that will appeal strongly to fans of Disrupt and Siege, as well as those of the burgeoning Eastern European grind-wave. So, was it worth the wait? Yes, most emphatically, with the caveat that we don’t have to wait this long for a second dose.

Posted by DesiccatedVeins at 12:59 PM 4 comments: