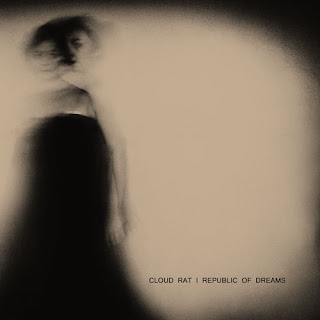 As a writer, it’s hard not to fall into patterns, especially when taking as specific a focus as “extreme music blogger,” an emphasis that deals in often-similar styles and textures. While these patterns are evident in the writing of me and others in many places, one of the worst might occur when writing about split albums.

For whatever reason, splits tend to be more or less glossed over by music writers, reduced mostly to a competitive structure that assesses which band out-performed the other and whether the loser is an outclassed upstart or an old fogey that simply lost its mojo. This approach ignores the fact that splits, when done right, can be more like full-length albums with a different set of performers on each side (sound familiar, Scum fans?) and it takes an excellent example of the form, like this split LP between Cloud Rat and Republic of Dreams, to jar me and my compatriots from debilitating reviewer lethargy.

Michigan’s Cloud Rat opens its side with the sludgy post-metal of “Burning Doe,” a move that simultaneously bucks expectations and accentuates the strength of the band’s songwriting. While an example of the “slow opening song” trope found on From Enslavement to Obliteration and scores of albums after it, the song is remarkable for two things: firstly, with its Isis-indebted quiet-loud structure, buoyed by blasts near its middle section, it is the rare instance of that trope that doesn’t crib stylistically from early Swans; secondly, it’s one of even fewer examples that has re-playability tied to its own merit and not simply the notion that, “Hey, it’s a grindcore band playing slowly!”

Second track blast-force “Parachute” opts to skip the subtleties and stomp the accelerator out of the gate, offering a memorable, no-nonsense 51 seconds of sweet-spot grind. The song is equally tight instrumentally and in terms of construction. This is what well-made grindcore does: take whatever time it needs to prove its point and then stop. There’s no dignity in wearing out your welcome, and stretching ideas farther than they need to go is as painful to the listener as it is the song structure.

Cloud Rat’s range within their chosen form never ceases to impress me. The stuttery opening riff on “Moving Mouths,” the sludge-courting heavy punk of “Keba” and the transition from blasting grindcore to vocalist Madison's acapella singing on “Stench of Sage” interact side-by-side perfectly without so much as a raised eyebrow. For some time now, Cloud Rat have been among the best active groups in modern grindcore, so the fact that this is their best material to date should indicate something pretty significant.

Republic of Dreams, who occupy the other half of this split, are a German and Polish screamo/emoviolence  three-piece with a focus on the fast and intense side of that spectrum. Grindcore fans looking for a screamo gateway drug will find it in this band, who serves as an excellent foil to the emotional, nuanced grinding of a typical Cloud Rat release.

The contribution from Republic of Dreams is a lean, frenetic bunch of songs, keeping an average length around a minute-and-a-half.

“There’s No Bullshitting Here” opens the side, and begins with a disturbing, minute-long soliloquy seemingly plucked from a horror film (though I can’t place its origin). The sample’s wracked closing scream blends into feedback and punishing chords that dance in off-kilter, disorienting patterns befitting the foggy streets and howling, feral inhabitants detailed by the sample’s breathless narrator. The track plays out like a harrowing chase, complete with pauses, backtracking and an abrupt, violent conclusion.

One of the screamo genre’s most striking features is its marriage of melodic sensibilities to hardcore punk’s standard unrelenting noise. “An Enlightened Macho is Still a Macho” is brimming with noodly earworm riffs but kept grounded by snappy hardcore drumming and emotive, varied screams.

Closing number “(Your) Banality is Evil” slashes out of the gate for its first 20 or so seconds, before sliding into a meditative-but-energetic instrumental section that builds the requisite tension for a final burst and subsequent collapse. Through use of minimalism and repetition, the track builds a beautiful end-of-record momentum that doesn’t suffocate the listener and the band uses just enough negative space to mandate an immediate repeat listen to the whole record.

In the case of both bands, there is more happening lyrically than your typical freeze-dried political straw man arguments or overdone, consequence-exempt violence.

Cloud Rat’s lyrical focus is deeply personal, and sometimes it’s possible to only grab snatches of meaning from the poetry. It seems almost like prying to dissect these songs in a review, but many seem to deal with painful experiences having to do with religion and spirituality, abuse and gender issues. Yet while clearly packed with underlying significance, it’s possible to simply enjoy the lyricism of lines like these from “Burning Doe”: “The leaves have this curl to them; / Racing past, golden hues like wisps of a horse tail not yet fenced in.” There is always more to unpack and discover in these songs, and vocalist/lyricist Madison is quickly proving herself as one of grindcore’s finest writing talents.

For Republic of Dreams, most lyrics are some combination of social and philosophical musings, with an alternately broad and personal bent. Songs from their side deal with machismo, impartiality, social change and a range of other topics, and include the added bonus of commentary on each song from the band’s lyricist. One of the more interesting is the economics-focused “(Your) Banality is Evil”: “Your ‘invisible hand’ is a force of regression / (Taking from the many, giving to the few). / Your ‘trickle down’ is (drop by drop) killing people. / Can you still believe all that nonsense?”

The LP’s packaging makes this a crucial release not just as music but as an artifact. While the individually screen-printed cover means that every copy won’t be an exact replica of the above digital image, it serves as a healthy reminder that this record is made for no one but you and the people who produced it; no intermediaries, no compromises. The booklet is beautifully laid out, and besides the lyrics contains a number of striking visual art pieces. Everything (the covers, the booklet and even the stickers that designate the sides) displays the same amount of care and it feels important. Punk is feeling like something matters and this is punk to its eyeballs.

Because of the quality found across its 20-minute runtime, this split feels truly collaborative. “Winning” or “losing” the record doesn’t apply here, because these artists feel like they’re on the same team. As a result, they manage to produce what is one of the best releases of the year and a must-buy album for dedicated extreme music fans.

You can purchase the split from IFB Records in the USA or React with Protest Records in Europe, or on Cloud Rat's upcoming US tour with thedowngoing.

[Note: Cloud Rat sent me a copy for review.]
[Edit: In the original version of this review, the phrase "vocalist Madison's acapella singing" read "(sampled?) singing" because I was unsure of the origin of the vocal that came after "Stench of Sage," and the phrase "effects-assisted stuttery riff" in the same paragraph was changed to "stuttery opening riff" in reference to the guitar work on "Moving Mouths" because I was unsure how the effect was produced. Guitarist Rorik has graciously informed me that the vocal on "Stench of Sage was Madison performing "Gloomy Sunday"("Szomorú vasárnap"), or "The Hungarian Suicide Song", and the guitar effect that opens "Moving Mouths" was produced not through an effects pedal or other artificial means but through an alternate picking technique.]

Posted by DesiccatedVeins at 2:23 PM