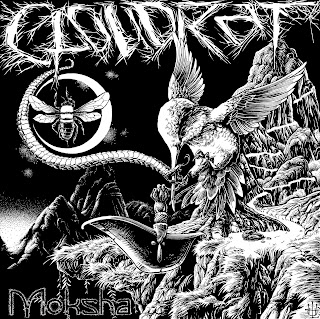 No album is more charged with a greater degree of both potential success and failure than a band's so-called "breakout record." Touted as the moment that a band is poised to "break out" to a larger audience, it is just as often the moment that a band's former fans choose to break ranks with them over an actual or imagined change in sound or approach.

With that being said, Cloud Rat fans, promise me that you won't run in fear when I tell that you that this album is unquestionably Cloud Rat's breakout moment. This is the point that fence-sitters and more casual grindcore fans will stand up and start to take notice of this talented Michigan band, but said moment is achieved not by removing elements of their former sound but by expanding their musical focus while improving upon the elements that made them great in the first place.

First track "Inkblot" opens with 25 seconds of echoing, haunted ambient noise that is cut through by a simple-but-massive thrash-grind riff delivered by guitarist Rorik. With a sound like a door being kicked in, vocalist Madison and drummer Adrian join in, blowing the record open in the tradition of album openers like Disrupt's "Domestic Prison" and His Hero is Gone's "Like Weeds." By the halfway mark, the track shifts into screamo-influenced territory, and it ends on a guitar-minimal hardcore punk note.

A melodic opening riff peeks through a black metal-grade wall of distortion on "Widowmaker," and within seconds the band is in full blast mode. A dark, snaking riff transitions the song into close-quarters, mid-paced hardcore that closes with an ambient coda similar to the opening of "Inkblot."

Sequenced third-to-last is a cover of the Neil Young classic "The Needle and the Damage Done," and in many ways this song is the record's emotional apex. The cover is arranged in a style that integrates the original's texture into Cloud Rat's approach, alternating between a clean-sung version (with vocals from all three members) that stays true to Young's haunting, minimal recording and a vicious, distorted hardcore version that boils angrily out of the pain and loss encapsulated in the lyrics. While by no means the fastest, heaviest or by any stretch the most extreme performance found here, it remains among the most resonant.

The trait which especially characterizes Moksha (and which is in part responsible for its success) is its variety. While indisputably a grindcore record, no track here is colored merely by a grindcore palette. Besides the already-touched-upon swatches of punk rock, hardcore, screamo and various styles of metal, shades of traditional rock, folk, noise, drone and post-rock blend to form a rich mosaic that is all but unprecedented in both scope and detail elsewhere in the genre.

Cloud Rat embrace cross-genre arrangements like a blastbeat-fueled incarnation of the Beach Boys circa 1966. Changes in style occur often across these 13 tracks, but always in an organic (if sometimes sudden) manner. Rather than the choppy, spastic lurches of your average kitchen-sink-grindcore band, these songs always feel at their core rooted in punk rock, even when exploring its most astral reaches.

If anything close to a wrong step is to be found on this LP, it is the soft, ghostly instrumental title track that closes the album, performed by Adrian and musical partner Thomas Oakley as the noise/ambient duo Found Letters. While perfectly enjoyable on its own, the piano and lost-souls drone of the track gives the album a feeling of dissolving rather than ending, and its nearly 7-minute length diffuses a bit of the energy built up on the preceding tracks. It's a minor criticism, and does little to shake the record's instant-classic status, but it's a flaw that could be easily resolved with a change in sequencing or by engineering a more structured climax for the existing song.

Even more than their willingness to experiment both structurally and sonically, Cloud Rat are defined by the bare, unrelenting emotion found in their music. Without lyrical context, each player's performance conveys the anger, pain and suffering that is at the heart of their musical power.

Accompanied by vocalist Madison's lyrics, however, that raw emotion is channeled and honed into a weapon. Focused alternately on the social and deeply personal, her lyrics shift effortlessly between poetically abstracted and smack-in-the face literal. While cloaked in some degree of anonymity, lyrics like these found on "Inkblot"reveal enough to be at once powerful and deeply disturbing:


Other tracks, like "Widowmaker," have lyrics that are as aesthetically beautiful as they are arresting and personal:


"Scars resemble the wilderness.
A marbling of reflected light.
Obscure and perfect she floated to me."


On "Infinity Chasm," a song penned jointly by Rorik and Madison, a parent laments the eventual and inevitable separation from a child by death. The song, detailing Rorik's own fears as a father of a nine-year-old daughter, benefits from its lyrical straightforwardness by the fact that most listeners will be instantly able to connect to its themes of love, loss and lamentation about this beautiful, terrible, stupid fucking world we all inhabit.

This album is a moment that Cloud Rat has been working up to since its first material, though only now that it has been fully realized is it clear that this is what the band had been reaching toward with their excellent string of previous releases. Not only is it the best release in the band's catalog, Moksha is a frontrunner for 2013 album of the year, and whether you're new to the group or a fan since the beginning, this is an essential record for this and any year following.


Moksha is available on vinyl (with a free download card) from Halo of Flies Records in the US, and for pre-order through 7Degrees Records  and React with Protest Records in Europe. The band will also have copies of the record available on their European tour, and dates for that can be found here. Download links and lyrics to past Cloud Rat albums can be found here.
Posted by DesiccatedVeins at 4:04 AM